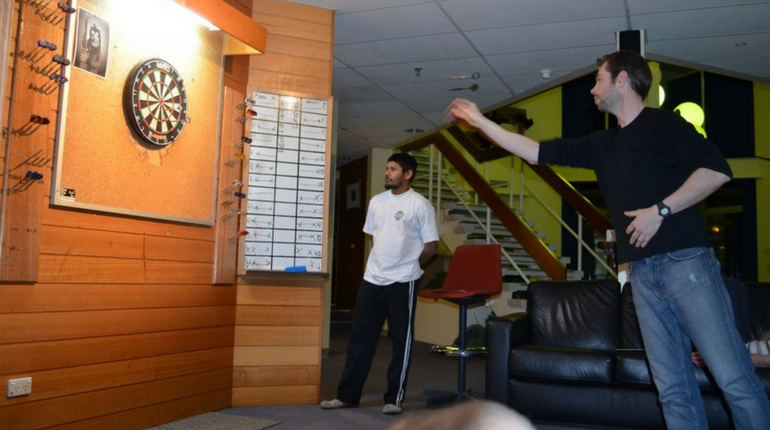 Whether you are completely new to darts or you have been playing darts for years, there is a very good chance that you are not all that familiar with the rules. Maybe your recent game with a group of friends brought up some questions or maybe a newbie turned to you for some insight.

This is why it is imperative to have a basic understanding of the rules and regulations of darts and that is exactly what you are going to learn below.

One of the most common questions is can you lean over the throw line?

The General Rules Of Tournament Play

When it comes to tournament play, players must stand at a throw line that is located 96 inches horizontally from the front of the dartboard.

During tournament play, it is completely illegal to lean over the line whatsoever.

With that being said, wheelchair–bound players must adhere to a different standard.

Why Aren’t Players Allowed To Lean Over The Line?

By this point, you might be wondering why players are allowed to step on the line, but not lean over it. Well, the basic concept is that not all players all created equal.

For instance, some players are taller, while other players are shorter. Taller players will probably have longer arms, so they are already at an advantage because they don’t have to throw the dart as far.

When longer players lean over the line the distance is even shorter, which can give taller players a huge advantage.

By ensuring that all players don’t lean over the throw line this makes the game more even and fair.

As mentioned above, each player will be required to throw his or her own darts and these darts must meet certain requirements.

Just remember that all these rules are for tournament play and certain individuals might play by different rules when they are playing at home or in a pub.

The best approach is to ask before you start playing, so that you don’t run into any conflicts. And of course, be cautious of proper dart etiquette.