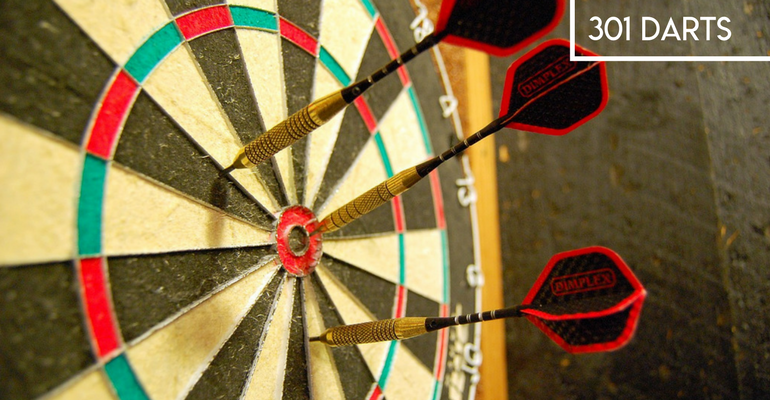 There are a number of dart games. One of the most common dart games is the 301 game pronounced as ‘three oh one’.

This game is common both casually in the pubs and in the tournament games. It is done in the local bars when the players want to settle the scores fast. This is because it is a countdown game and they want to start with a small number and get to zero fast.

When starting the game, each of the players starts with 301 points which they are expected to play by counting down to zero. It can be played by individuals or by teams. Even in the case of a team, each of the competitors will start with the 301 points.

One game of the 301 consists of three races to zero or what is also referred to as legs. This means that a certain match will generally have three games.

In order to complete the game, each of the players in each team has to play one complete leg. The common rule even in pubs is that each player is given three darts to throw and the total points earned in that round is deducted from the remaining value from the initial 301.

The turn to play is then moved to the next player and this keeps rotating in this manner until when one of the players goes out.

In the case of the tournament games, the players are given nine darts to throw as they warm up before the official game starts. In order to determine which order they are going to play the game, each competitor throws one dart.

In the three darts that each player throws in the first turn, at least one of these darts must land on the double ring on the dartboard. It can land on any numerical value on the ring.

It can also land on the double bull also known as the inner bull. This is because this red section is also taken as a double.

This means that the first score will either be 50 points for the bullseye or double the numbers between 1 and 20.

The bullseye is measured as 50 points.  This is also counted as a double. This is because the four thin green areas that surround the inner bullseye have 25 points.

Every dartboard has a nominal value from 1-20 engraved on the sides of the board. These numbers are used to indicate that you get the points of the numbers there.

When dart lands in the two larger areas on the board that is counted as a single. This means that you get the exact nominal value under that place.

The largest nominal value is 20, which means any throw, the largest point you will get is 60. Outside the double ring, there is no point awarded. This black part earns zero points.

Whatever number of points you get per round is subtracted from 301 in the first turn. This becomes the total remaining for that particular player.

This goes on until one of the players in the team is able to get a zero. If any player scores points more than what is remaining for them to score a zero, this is referred to as a “bust”.

They return to the score that they had before taking that turn. After a player scores a zero, the game is over. In case it was played as a team instead of individuals, the winning team is determined by adding up the remaining scores of all the players.

The team with the lowest combined scores is the winner.

In case the two teams tie in their scores, the player that reached zero wins and so does their team.

The players must double in and double out. Just as the first dart must be on the doubles ring or the bullseye so is the last dart throw. This means that you must do your calculations to make sure the second last throw gives you an even number so that the final throw less this value will give you a zero. This is because you can’t double up with 1 or an odd number.

You can also watch this video that explains how to play 301 darts as well.