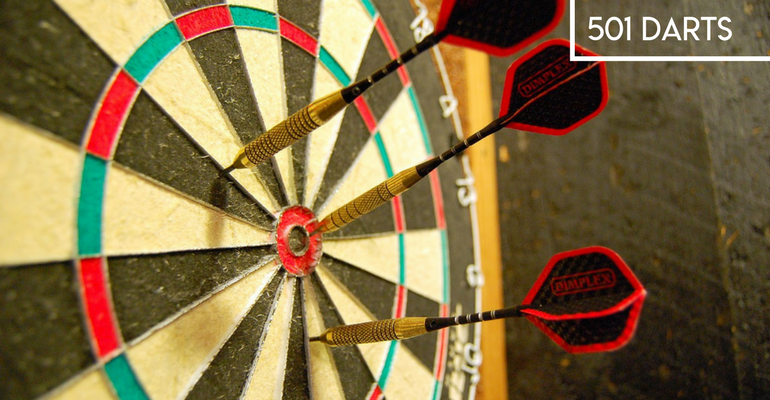 501 darts i similar to the 301 and all ‘01 games. This is because they are all countdown dart games. This game is named this because that is the score in which it starts with when starting to play.

Each player starts with 501 points and your points get subtracted from this value until you reach zero. This gives you a round score. Unlike the 301 game which is very short-lived.

501 is popular in the pubs where you want to take some time enjoying the game before getting a winner. 501 is also played professionally in tournaments as one of the most popular game in most championships. A game in the 501 darts is played best of 5 legs which is equivalent to 5 rounds of 501. This means that a player that reaches 3 legs becomes the winner of the game.

501 darts is referred to as a double-out game. This means you must finish the game with a double score.

501 darts starts by flipping a coin to determine who goes first or on other occasions, they throw the darts to the dartboard.

The throw that is closest to the bullseye is the one that begins the game. In case there are more than two people playing then the second closest becomes the second one and in that order.

In 501, going first has an advantage because there is a high chance of winning in a certain leg before your opponent gets an opportunity to rebuttal. You may end up playing more turns.

Each player will throw three darts per turn but you don’t have to throw all three darts. Like in the case where you have a small number left, it is likely to use just one dart to score.

As the standard dart board looks, the innermost circle in the board which is red in color gives you 50 points. This is also considered to as a double, so you can compete with it in a 501 dart game.

The thin green section just after the inner bull is the outer bull or the bullring. This gets you 25 points.

The outer-most thin section is the doubles ring and the inner thin ring between the two large sections is the triples ring. The single section will give you points equivalent to the numerical value of that wedge, normally indicated on the edges of the board.

The entire game of 501 darts is to ensure that you are able to get the most number of points per turn in order to remain with a smaller round score. This means it will be easier for you to reach zero

This is the trick of this game. Being able to get a value that is not going to be larger than the value remaining to get to zero. In case this happens, this is called a bust.

This means that the round is restored. The player is deducted for all the points earned in that round and he returns to the round score that he had before. This is because instead of getting a zero, it is going to be a negative score.

There is a bust also when a player has 1 point left after subtracting the score from the points earned in a round. This is because there is no possibility to get a 1 with a double score. It will give a negative score.

You can also bust if you get a zero but then it is not from a double ring section. For instance, if you have 4 points left to get to zero and instead of an inning a double-2, you have the dart on the single-4. This is also taken as a mistake. This turn is nullified and the person gets the points before that turn.

This is to prevent from the scenario where the game is played indefinitely or for too long. This is where armature players are playing and scoring very few points. In case after these 20 turns the scores are equal, then an extra 10 turns are added for them to continue.

Within this 10 rounds anyone who gets zero wins. Otherwise, if the score is the same after the ten extra rounds, this match is said to end as a draw.

There are different rules that can be set on this game by the players. For instance, some insist on starting with a double point. Others say that ending the game, the dart is supposed to hit the same double as how the game began.

This is used to help the players strategize on what is the wise place to score. This is especially used when the round score gets to 100 or lower. For instance, if you have just 50 points left to zero you can have a T12 and a D1. This is a very interesting game with very basic rules that any person can understand and play.

You can also watch this video to understand how to play 501 darts as well: