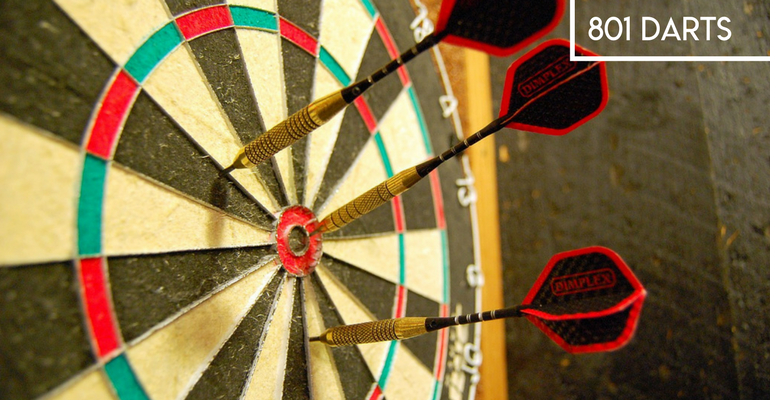 This is one of the ’01 games that are played in most dart tournaments. Unlike 301 and 501 dart games which takes just a short period of time, the 801 game tests the endurance of the players.

It is hard to find individual players playing this game. It is played mostly by teams, where you have two competing teams with around four players each.

It depends on the rules that you make when beginning this game. It can be single-in, double-out or play as a double-in, double out.

But in all occasions you must finish the game with a double score. This is by either throwing the dart on the double ring at the edge of the dartboard or the red-section of the bullseye which gives you 50 points.

The rest of the players follow in the order in which their throws are closest to the bullseye. In occasions when there are just two teams or players playing, there is a toss of the coin. Each team chooses a side of the coin. The side which lands after the toss becomes the starting team. Every player thrives to be the one starting.

This is because you have the possibility of getting to the zero point first before your opponent has the opportunity to rebuttal.

This game begins with each of the players getting 801 points. The main objective of this game is to be the first person to reach 0 with a double score. Every throw to the dartboard gives you a score that you deduct from the initial 801 points. This gives you a round score.

This keeps going on until when the final score is zero. In case you throw an exact number of points, then you have to start again from that score. After every round, the turns to play are then rotated to the other peoples in the teams. In a single round, the player is given three darts to throw and the total scores from the three are then recorded as the score in that round.

In this game, all the numbers on the board can be played as long as you end with a double score. When you hit the thin outer-most ring, this gives you a double score to the numerical value of that section.

If your dart lands on the inner ring between the two larger sections, this gives you triple points. That is three times the number of that section. The other two large sections in the board are the single sections. These give you points the exact value as the value of that numerical value.

Players thrive to get a large double point when starting with the main aim being in the 20. The maximum you can get in a single throw is a triple-20 which gives you 60 points.

You keep subtracting in each round until when you are left with a small value. This means that you have to strategize in a way that you will hit a double point without being larger than the round score left.

In the case where it is larger, then you are said to bust. This also happens when the value after subtracting is 1. In this game you start strategizing in 170 points.

That is three triple-20, three  single-20 and end with a double bull. This means that you have to return to score value before playing that turn and wait for your next turn to play. Any player that hits a double equal to the score left to get to zero then wins the game.

Strategies to win the 801 game

Records of all the throws are recorded in an Out Chart. This makes it easier to know what number of points is left for you to win.