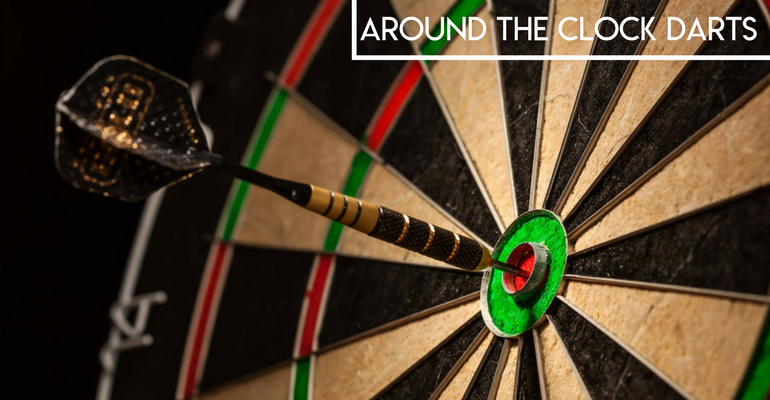 This darts game is named this way because it uses a dartboard and the main objective of this game is for the player to play round the dartboard in a clockwise manner. It is also referred to as “around the world” darts.

It needs good practice as it uses the entire board and some areas on the board are harder to reach than others. This is the few dart games that can be played by a single player mostly when they are just testing how accurate they are when aiming the darts.

It is however commonly played by multiple opponents who can play and compare their scores. There is no limit to the number of players that can play.

This is a very fast-moving dart game especially when played by advanced players. Some players can finish it in just ten minutes. It is a very easy game since all you need to remember is the previous number you scored on and your current one.

The winner is the player who is able to hit all the numbers from 1-20 in numerical order and be the first one to finish.

How to Start Around the Clock Darts

In case there is more than one player, they can get the order by flipping a coin to determine who plays first.

You can also consider using the left-handed throw; this is where each of the players will throw a dart into the board using the left hand.

The throw closest to the bulls eye becomes the first to play. The one that is furthest from the bull’s eye is the last to play and the rest play in that order.

The first thrower has an advantage over the rest of the players. This is because it is more like a race.

However there are occasions when the weakest player is allowed to start.

Each of the players is given three darts to play with at every round. This is as it is in most of other dart games.

All the players aim to be able to hit on the specific number that they are supposed to be playing on with the main focus being on the triple ring. Also called a treble, this will earn you 3 points.

Hitting a single area will give you one point and since hitting a double is referred to as a bad throw, it will also earn you one point. These three darts are not supposed to be thrown in one number as in the case of other dart games such as cricket.

But the first dart will be thrown at 1, the second at 2 and so forth. In the next time they are at the board they will then throw into the next three numbers which is 4, 5, 6 and so on.

In case you are not able to score on a certain number, then you are not allowed to move to the next number until when they are able to get it. You can only proceed then.

Regardless of whether you hit the double, triple or single, it is referred to as a hit. You can then continue around the board hitting all the twenty numbers and finally the bullseye.

You then add up the points that you have garnered in order to get the total score.

Around the Clock Dart Strategies

Around the Clock Darts Handicapping

Since it is unlikely for you and your opponent to be equally talented, there is always an option of setting a handicap. There is no fun in always winning the game with a very huge margin.

The most used form is by limiting the most advanced player. That is saying that they have to hit a specific ring and letting the weaker player shoot on any area.

This is however one of the most exciting dart game.

Want to see this dart game in action? Here’s a video of pro dart player Michael van Gerwen playing around the clock darts: