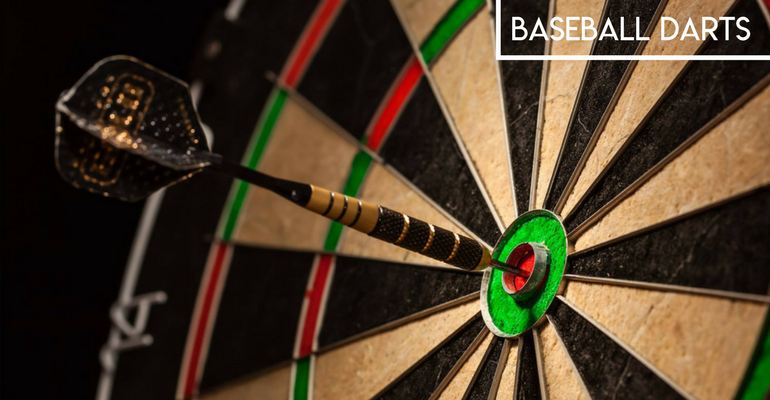 There are a variety of dart games, but baseball darts is one of the most common in America. It is also referred to as the American dart.

The rules of this game are based on the rules of playing the baseball game. Just like baseball, it is based on earning a lot of point over the course of 9 throws which is also referred to as inning.

Baseball darts has to played by at least two people or teams.

Getting Started With Baseball Darts

This game begins by preparing a score card. This card is made of 9 rows to represent the 9 innings and one row below to indicate the total scores.

The column number is determined by the number of people who are competing in the game. The names of the players are then written across this scorecard.

To determine the order in which the players will play and compete, the player each throws a dart on the board. The scores are recorded.

The player who is closest to bull plays first and the one furthest will play last and in that order. This is the order in which their names are also going to be written on the scoreboard in order to avoid any confusion.

The inning corresponds to the number of the section in which you must score. The dartboard is normally subdivided into 20 sections that is in the shape of a wedge.

There are numerical values at the edge of the board which represent the value of that wedge. This means that on the 1st inning, all your darts in that round must fall on the section that is labeled 1. This goes on for the rest of the innings.

In case you throw a dart and it falls on a number that is not the number of the inning, then this score does not count towards your total score. No point is awarded for that throw.

Just like in baseball, the points that you earn in baseball dart are called runs.

Since every player is expected to throw on the same number during a certain inning, what makes in the scoring runs is the place where that dart falls. If it falls on the outer ring of the dartboard also known as the double ring, then you score two runs.

The same is applied for when it lands on the inner ring halfway between the double ring and bull’s eye, which is the triple ring. This will give you three runs. If the dart falls anywhere else on that specific wedge then you only get a single run. This means that the run determines the score you get.

For instance, if playing on the seventh inning, you are given three darts to throw. You have to throw all these darts on the wedge or slice indicated seven.

If in the first throw the dart lands on the double ring, the second on a triple ring and the third one land on the other areas that have no ring. Then the score for the player for this inning will be 2+3+1= 6.

The score is 6 and indicated in the score card. In case one of the darts went out of this section, it will be counted as a 0.

The objective of this game is to score the most runs per inning and to ensure that you do not throw outside a specific section that you are playing for.

How to Win Baseball Darts

After every turn, the player is supposed to add up the score. This should go on as the innings proceed and indicated on the score card. On the ninth inning, the winner is the player with the most runs.

However, there are occasions where a twist is added on the 7th inning also known as “7 inning stretch rule”. In case a player scores a zero that is, doesn’t throw any dart on the 7th section, then the total score that they will have gotten by then will be cut into half.

This is intended to add some tension to the game. This makes them ensure that they score.

However this is not advised for new players as they easily get frustrated. It leads to very low score. This is done to advanced and expert dart players

In case there is a tie after the 9th inning, an extra inning is added. In the case of the League Play, an handicap can be included. A handicap in baseball dart is taken as 80% of the difference in the scores of the two teams.

This 80% value is normally given to the lesser team or the team whose average is the smallest. If a player is absent during a certain game during the League Play, they receive 80% of their average.

In case you’re more of a visual learner, here’s a video explaining how to play baseball darts as well: