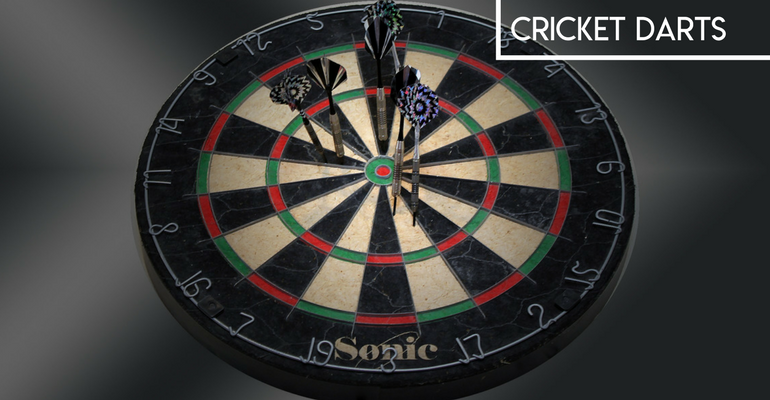 Cricket darts is the most common English dart game that is played. It is also called the English dart.

Cricket darts is played by two individuals, one on one or two teams. The main object of this dart game is to own what is referred to as closing certain numbers on the dartboard. You also want to score the highest score between the two players.

It is only closed once both players and teams have scored three on that number. Once a certain number is closed, then no further scoring can be made on this number.  If you are the one who owns a certain number, then every time your opponent hits this number you get points for it.

This is until now the opponent closes it too. This can be done by hitting the single, doubles or the triple ring of that number.

The game is started by creating a scoreboard. The names of the teams or players are written at the top-most row and between the two names there is a vertical column with the numbers 15-20 and B to represent the bullseye. This is used to record every turn.

When beginning, you need to determine who goes first or which team plays first. This is normally done by tossing a coin where each team chooses a side of the coin.

Each of the players will take turns and throw three darts. The scores on the numbers and bullseye are taken. In case the team has more than a single player, the team members will choose which player will play during their turn and then they can rotate once their turn reaches.

The game can be played without taking points, in the case where they just compete on who is able to close all the numbers first and bullseye. The first to do it is considered as the winner.

This is a quicker version and it doesn’t require for all the teams to close all the numbers. This is preferred when the players want to take a short period of time.

However, in most cases, points are taken. In case the dart lands in the double ring, then it is taken as two hits, the triple counts as three hits.

However the inner bullseye counts as a two hits and the outer ring is one hit. Points awarded to the players are equal to the number that they have closed out.

This means if for instance you close out 20, then you hit a double-20, then 40 points will be awarded 40 points. The outer bullseye is equal to 25 points while the inner bullseye is worth 50 points.

The points that you get when your opponent hits on a number that you have already closed is also added together.

The strategy that is used by most players is aiming first for the triple-20 because of the many points or the larger numbers and then they end with the bulls eye. This is because it is the hardest to score.

The darts cricket scoreboard is used to keep track on the progress of the players. Most players just buy one, because it’s easier. Here’s a great option on Amazon.

Once a player hits a certain number, a diagonal line is drawn under their name on the board and next to that number. Once they hit it again a line is added to create an X.

In case they hit a different number then a diagonal line will be drawn next to that number and wait for the next turn. In case they hit a number the third time, then a circle is drawn around the X. This is used to indicate that this number is closed out by this player.

A line is put through the number once it has been closed out by both competing players. This is used to show that points will no longer be earned for this specific number. In order to be able to get a lot of points, it is wise to close out a number before your opponent so you can earn points from it.

From this scoreboard, you can tell the winner. This is the person who has rounded X on all the numbers. This means that this player has been able to close-out all of them. The winner is also the player who has the highest or equal number of points. In case the first player to close out the numbers has fewer points than the other one. Then the game continues. This is until when the player with highest points has also closed out all the numbers.

Want to see it in action? Here’s a video of how to play cricket darts: