Do you enjoy the game of golf? Do you like playing darts? Yes? Well, what if you could combine the two games together? Well, with golf darts, you can!

There are several variations of the game of darts, and many include melding together other games and popular sports, such as football, baseball, and tic-tac-toe. These adaptations bring additional elements to the original game of darts, and make it even more interactive, interesting, and just plain fun, as they involve more than simply getting the highest score. Of all the different renditions of darts, perhaps one of the most underrated – and one that many people don’t even know about – is the game of golf darts.

Golf darts is quite a unique game, and while it does take some time to learn how to play and to strategize, once you have the hang of it, it really does bring a whole lot of fun and excitement to the table. Have your interests been piqued? Are you interested in learning more? If so, then keep on reading to learn more about golf darts, including the objective of the game and how to play it. 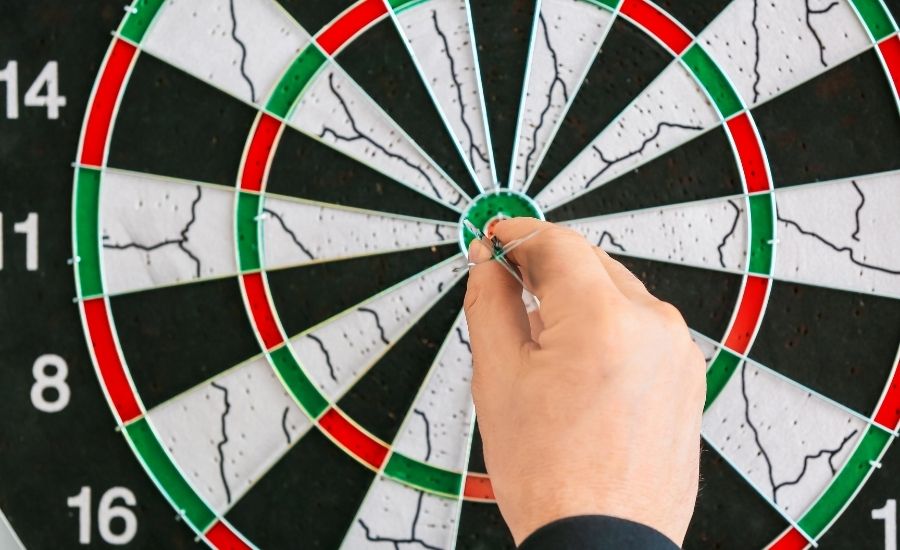 What’s the Objective of Golf Darts?

This game can be played in either 9 or 18 holes (or rounds) and just like traditional golf, the objective is to complete each hole with as few “strokes” as possible. Also like the traditional game of golf, with golf darts, it takes longer to complete 18 rounds of golf darts. Any number of players can participate; however, if you’re playing with a larger group, consider the fact that it takes double the time to complete the 18 round version. Each player takes turns throwing their darts at the selected number, and the number of strokes each player completes a turn in will be determined by where their darts land on the board.

As mentioned, any number of players can participate in golf darts. Whether you’re playing the 9 or 18 hole rendition, holes are played in numerical order; for example, during the first round, the 1 segment will be played, with the second round, the 2 segment will be played, and so on. The “stroke” count for each hole is determined by the segment of the board that each player hits.

Scoring for each round in the game of golf darts is as follows:

If a player completely misses, the number of strokes for that turn will count as five.

Each player gets three darts to throw per round. Players can decide to stop throwing after any of their throws; however, it’s important to note that whether a player decides to stop before they have thrown all three darts, or they have thrown all three of their darts, only the final throw a player makes counts toward their score. For instance, if a player hits the treble on their first throw, their score for that hole would be 2 strokes, and if they hit a double, they would have a hole in one for that score.

Once a player has decided that their turn is over or they have thrown all three of their darts (whichever option they decide), the next player is up. When all players have finished a round, the game progresses with players moving onto the next “hole” (number on the board), and then start the process again. Like the traditional game of golf, once players have completed all rounds, scores are tabulated, and the player who has the lowest score is crowned the winner (actually crowns aren’t necessary, though it could add another layer of fun to the game). 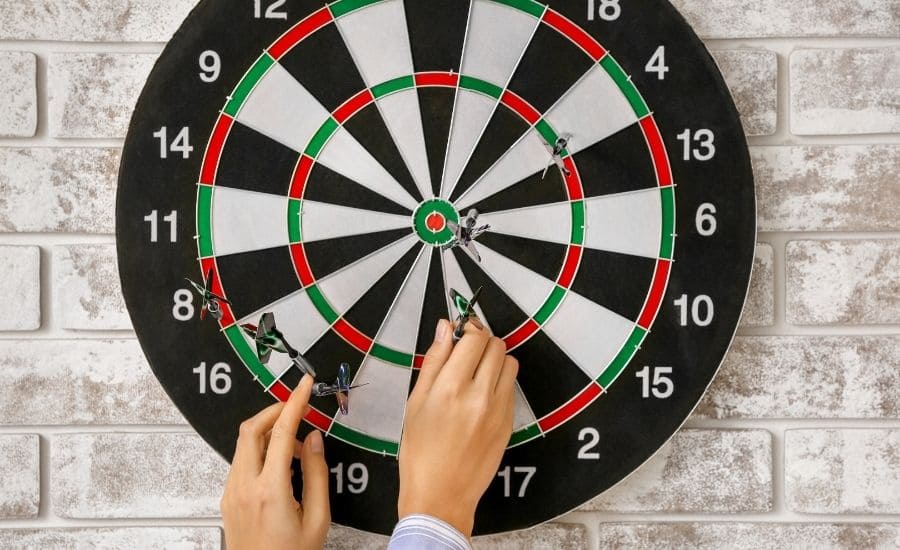 How to Calculate Scores for Golf Darts

As you can probably imagine, scoring for the game of golf darts is as easy as it sounds. On the top of a chalk or dry-erase board, or on a piece of paper, write the names of each player. Write the numbers 1 to 9 or 1 to 18 (depending on how many holes you’ve decided to play) in a column along the left-hand side of the board or paper.

Once the game has commenced, simply mark each player’s core underneath their name next to the round that they completed playing. When all players have completed all rounds, add together each player’s score for each round. The player who has the lowest score is the winner of the game.

If you prefer, you could create two columns on the board or paper underneath each player’s name. You can mark the score for a round in the first column, and you can keep a running total of each player’s score for all of the rounds that have been played in the second column. By using this scoring method, you can see who is winning at a glance at any time while the game is being played.

Still have questions about the game of golf darts? Here’s a look at answers to some of the most frequently asked questions that players have about this fun and creative version of darts.

A: Anyone can go first. You and the group of people you are playing with can make that decision. There is no advantage or disadvantage associated with a turn; all players have the same opportunity to win.

Q: How does your turn work?

A: You’ll receive three darts and throw them at the target for each hole. Only one dart will count toward the score for each round, and that’s the final dart you throw. You don’t have to throw all three darts; if you hit a good score on your first throw, you can decide to stop throwing and end your turn.

Q: Are there any strategies that can be applied?

A: While there aren’t any specific strategies that can be applied to this game, as the goal is very specific, there are some things that you can do to improve your game, including: