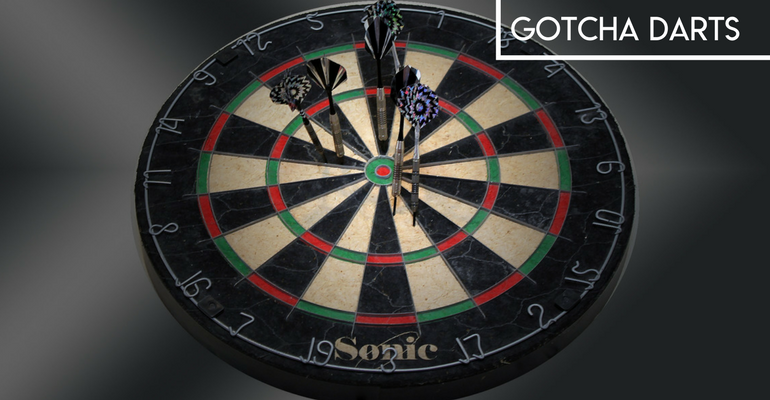 Dart games are played across the country in a variety of ways. From the traditional dart game that is played in tavern settings to dart games played online with unlimited players. With this said, the dart game Gotcha is extremely popular among players of all skill levels.

In the United Kingdom and North America, players take part in a dart game that involves hitting targets that are agreed upon, before the actual game begins.

Gotcha is played on a traditional dartboard, with a bull’s eye and three darts. Players must try to hit a variety of targets in a single session, which includes three darts.

There is no limit on the number of players that can participate in this game or the length of the game. The time will vary on how many targets are chosen. However, the game always ends with the player dropping half of their score collected throughout the game.

Each player must score the exact number agreed upon before the game begins. At the very beginning of the game, it is absolutely pertinent to go over the rules with your friends.

It is highly recommended to choose a score that everyone is comfortable with. Choosing a higher score, such as 500, can prolong the game.

Selecting a lower score can help make the game end so much faster.

Killing is a vital part of Gotcha. In fact, I believe that you find it is the most fun aspect of the game.

Killing allows players to completely reset their opponent’s score back to zero. All you have to do is throw your dart and score the exact number of points that your opponent has.

If you manage to pull this off, you will kill your opponent and they will be forced to restart from zero.

When playing Gotcha, you will also find that it is possible for any player to bust. This means that you have gone over the specified winning total.

To be declared the winner, you must score the exact number of points agreed upon from the beginning of the game. No more or less is allowed. If you bust, the score will be reset to the score before the previous throw.

Must Play Until Someone Wins

The dart game Gotcha will continue until someone comes out on top.

In fact, the players will continue taking turns throwing until one of them is capable of scoring 301 points or the specified total. Since, this is extremely difficult to accomplish the game could potentially last for hours.

If you choose to partake in a game of Gotcha, you must be willing to remain until someone scores the correct number of points.

The player who scores the correct number of points first will be declared the winner. The other players who come up short will need to put their skills to the test in another game.

Gotcha is an extremely fun dart game that can be played in residential and bar settings. However, all players must be willing to commit to an extended play time.