At the pool hall, in your man cave, garage, or basement, or in the lounge of your college dorm; if playing the same two or three dart games has gotten mundane, you may be looking for a new variation to add to the mix and spice things up.

While there are literally dozens of different types of dart games, one of the most exciting is also the most overlooked: Killer darts.

Killer darts is one of the most unique versions of the game, as it can easily be played with an odd amount of players. It is ideal for larger groups of players, too, as it tends to go faster than many other versions.

Generally speaking, there are several ways that Killer can be played, as the rules of the game are similar to the rules of the basketball game of HORSE, making it a competitive game of elimination, as players attempt to knock out their opponents rather than attempting to beat them by achieving a certain score.

The rules of Killer darts are super easy; so easy, in fact, that you may think that the simplicity of the game is deceiving.

However, that said, the game does encourage players to apply different strategies and tactics as they play. Interested in adding Killer to your inventory of darts games?

If so, keep on reading to learn more about the objective of this game and how to play it. 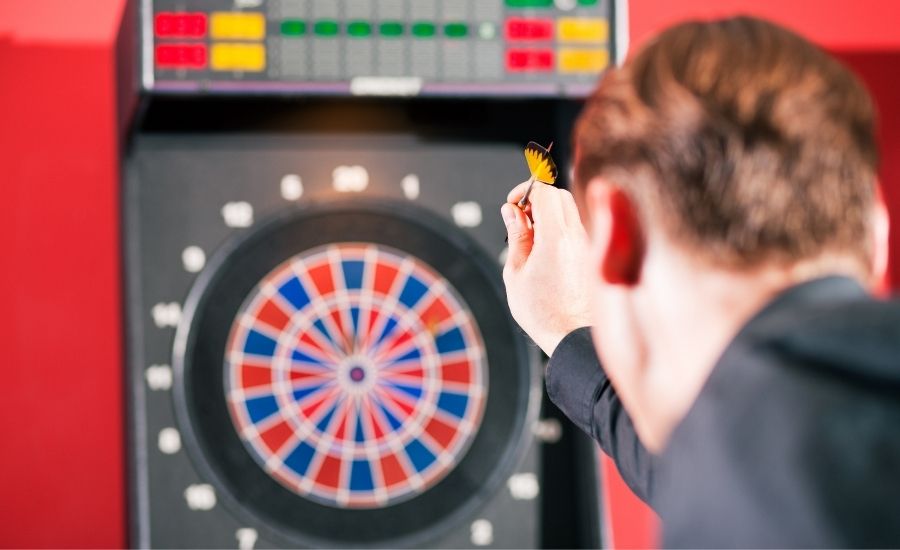 What is Killer Darts?

Killer darts is a game that involves players competing against one another in an effort to knock one another out of the game until one player is left standing. As mentioned above, it can be equated to the darts version of the hoops game of HOSE. Also as mentioned, the game is ideal for large groups and odd numbers of players. While 3 to 20 or more people can play, for the best results, playing with 5 to 8 players is ideal. If you’re playing with a large group of people, separating the group into teams is recommended.

It’s super easy to play; in fact, so easy that people of all ages and ability levels can play Killer darts. As a matter of fact, playing with people of varying skill levels adds to the fun of the game.

The main objective of the game of Killer is to eliminate all other players (or other teams, if you’re playing in groups). The last player (or team) standing is the KILLER (winner).

Setting Up the Game of Killer Darts

Setting up the game of Killer is simple. Here are some tips for ideal positioning of the dart board and throwing line for this game.

How to Set Up Killer Darts

Select one person to keep score before starting the game. Doing so will ensure that the score – which is vital to keep – is being recorded throughout the game.

Once the playing order has been decided and all participants have selected a number, you’re ready to start playing Killer.

Here are the rules for how to play killer darts: