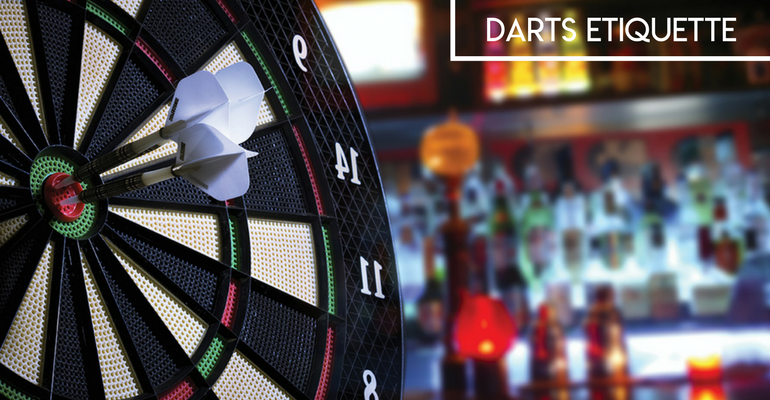 Playing darts casually with friends at the bar is a bit different from when playing in tournaments or a league. When you’re in a pub or bar, you’re relaxed, having drinks and you aren’t overly concerned with dart etiquette.

Depending on the set-up, the dart etiquette that the shooters observe will differ. There is, however, those things that are shared no matter where the location is. For instance, it’s good sportsmanship to shake hands before a game. Most of these go unsaid and are just observed across the board.

But if you’re new to the world of darts, and want to make sure you’re being respectful of other players, here’s some basic dart etiquette to keep in mind:

These are general and you have to observe them no matter what game you’re playing. But here are some other general best practices that might differ depending on where you’re playing.

Move away after your throw: After you’re done throwing, step back from the throw line and let the next person step up to throw.

Who keeps score in darts?

It’s common for the person who threw the darts to say their score for it to be recorded, unless there’s a scorekeeper. If you have someone keeping score, they should be the person in charge of tracking the points for each throw.

If you’re using an electronic dartboard, the scoring is handled for you.

Otherwise, you’ll have to keep track yourself, usually with a dart scorer. There are also hand signals to be used in case it’s crowded.

Also, make sure you score your darts before pulling them out. That’ll help you avoid any arguments over what your score was for each throw since you can clearly see where the dart landed on the board.

Should you bring your own darts?

A lot of bars that have dartboards also have some darts on-hand for you to play with. But it’s perfectly fine to bring your own darts as well. Just make sure you keep track of them throughout the game so you don’t lose them.

For celebration after getting a good inning, a gentle fist bumping is appreciated as opposed to high fives and cheers. This is because on most occasions they have a handful of darts in their hands. Depending on the tradition of the local, chatting after playing is treated differently. Some will advise you e.g Shoot a double, fill the green etc. However there are other places where during play time. There is pin drop silence in the room.

So it is good to just follow the social rules so that you are respected and to ensure that the game moves on smoothly.

Above all else, keep things respectful. One of the best things about darts is that while it’s competitive, it’s not overly aggressive and it’s not a contact sport. It’s about having fun and socializing. Be respectful of other players and you’ll have a lot more fun.