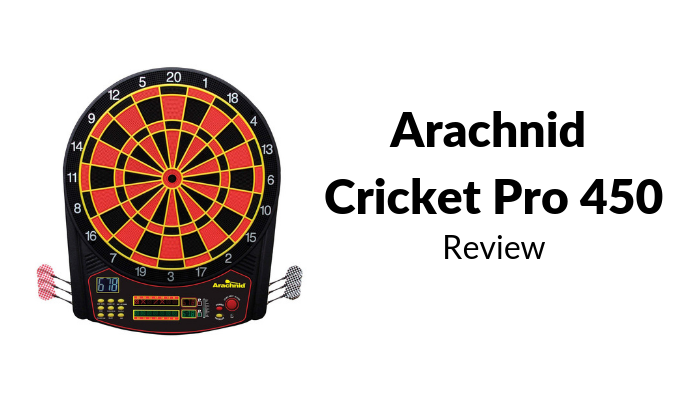 The Arachnid Cricket Pro 450 is an electronic dartboard that is affordable and lots of fun.

Electronic dartboards are boards that use a plastic construction in order to receive soft-tip darts. These use tiny holes for the darts to slot into, which thereby reduces the need for a sharp end. That’s great for kids and others that are a liability with pointy objects, but it also allows for another great feature: electronic score keeping.

In other words, these dartboards know when a dart hits them, which allows them to automatically update the score in accordance with various different game modes. That not only makes playing a lot quicker and more fun (because you don’t need to keep stopping to write down the score), but it also creates the opportunity to play different games and even dabble with some smart features.

The Pro 450 is the lower-end offering from Arachnid, but that is not to say it doesn’t come packed with great features. Read on to find out more.

This dartboard is similar in appearance to the more expensive offerings from Arachnid. It utilizes a black and red tournament-colored design to give it an authentic look and has a regulation 15.5” target area, making it ideal for brushing up your skills.

The digital readout and input can be found right below. This is intuitive to use, though not particularly large and you’ll likely want to use the instruction manual at least the first time.

The lights from the LEDs are bright and multicolored though and this means you can normally see it with no need to get up close and personal. Overall, the footprint of this dartboard is small and it looks great in any pub or arcade.

Darts can be smartly stored in the sides of the board.

One thing that’s missing here combined with the more expensive models though, is the micro-thin segment dividers and the square holes. These innovations are designed to reduce rebounds and this is one of the bigger issues you’ll face here: with darts returning to their sender more often than you’d like.

Fortunately, because the dart are soft tip, this isn’t dangerous or likely to ruin your darts. But it can really undermine the game.

What matters more than the look of this dartboard though is the functionality. In terms of features, you get an awful lot games to play – 31 to be precise with 178 different variations.

This supports up to eight players too, keeping track of everyone’s scores so that a potentially chaotic game and remain fair and organized. It’s ideal for parties and a great choice for any pub.

There’s also the controversial ‘heckler mode’ which some people will love and others won’t be such big fans of.

This mode uses a speaker to mock bad throws and can be a fun inclusion during a games night - for a while at least before it gets old! 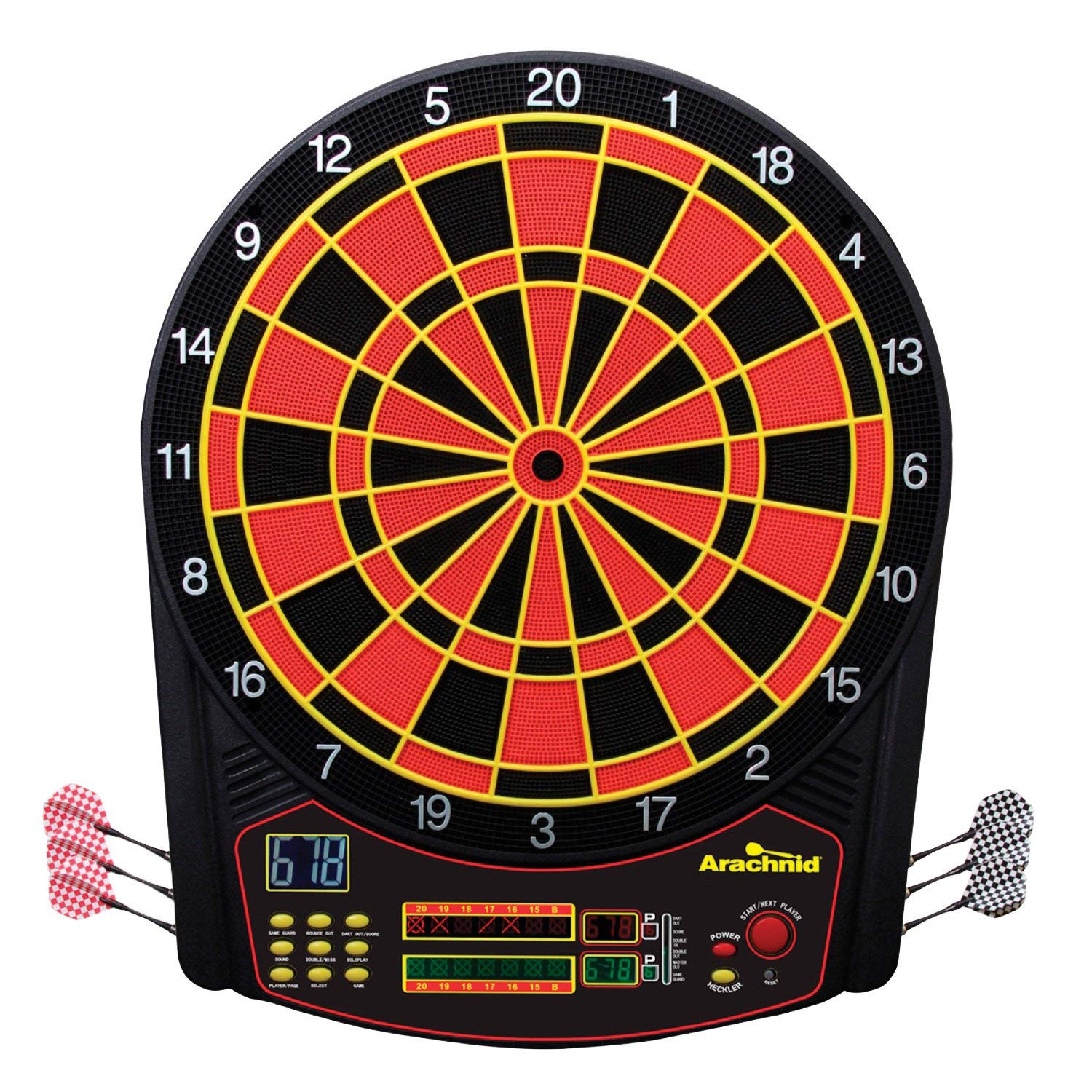 This is the cheaper model from Arachnid and as such it has a few features missing. Many people won’t mind that the design is a little larger and heavier than the more premium models, especially considering that it will stay hung on the wall most of the time anyway!

Likewise, with the reduced game modes, this is unlikely to be an issue for many. There’s still a lot to play here and you may find you tend to stick with 301 or cricket darts most of the time anyway. You might miss things like the handicap functionality though, or the ability to track your average-score-per-dart.

The real misfortune though is that this dartboard lacks the anti-rebound features of more expensive models. This can be somewhat mitigated with the right soft-tip darts, but it’s still a nuisance and one that can unfortunately become very frustrating during an otherwise fun game.

This is an issue endemic to electronic dart boards and it’s one you’re likely to encounter often. So don’t let it turn you off necessarily – just know what you’re letting yourself in for and approach this in the spirit of fun.

The Arachnid Cricket Pro 450 is a great budget electronic dartboard for casual players. It’s perfect for your den or playroom, and it’s great for the entire family.