In darts, there are tons of terms that are frequently used. Some are easier to understand than others.

As a frequent darts player, there is a good chance that you’ve heard the term triple at some point or another. If not, you need to learn about the triple and the triple 20 as quickly as possible.

By scoring the triple 20, you’ll be able to push your score up high very rapidly. So, what is the triple 20? I will attempt to answer that question for you in the in-depth guide below.

Layout Of The Dart Board

When you look at the dart board, you will see that it includes several different colors. Black and white spots are considered single. Since they’re much bigger and less risky, they’re considered lower scoring than the alternatives.

It is very easy for beginners to sink their darts into single portions of the board. Also, you should already be familiar with the bullseye. The outer bullseye is generally worth twenty-five points. The inner bullseye will score you fifty points.

The board also includes doubles and triples. The doubles are the most outer ring. They’re much smaller than the others, but bigger than the triple segments. Triples are also sometimes referred to as trebles.

As a veteran darts player, I can tell you that you should always aim to score doubles and triples. Hitting these marks will prove to be far more difficult, but it’ll pay off dividends in the future.

Look at the names of these sections. They’re called doubles and triples for a reason.

Now, look at the numbers on the outer potion of the dartboard.  Say you throw you dart and it lands on the black portion of 12. You would score 12 points.

Now that I’ve broken down the doubles and triples, you should already have a good idea what the triple 20 really is.

On the dart board, you have a double 20 and a triple 20. The double 20 is the small portion closest to the number 20 on the dart board. If you move inward towards the bullseye, you will find a similar section. This is the triple 20. 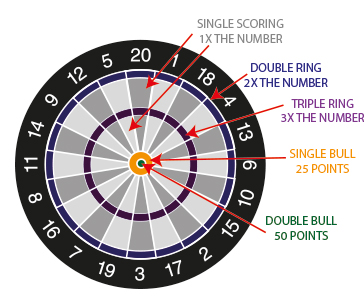 If you’re able to land your dart in this section of the board once, you’ll receive 60 points. Believe it or not, the triple 20 is actually more valuable to the player than the bullseye.

Why Is The Triple 20 So Coveted?

You’re probably wondering what makes the triple 20 so special. The answers are actually plentiful.

First and foremost, I can tell you from experience that hitting a triple 20 is incredibly difficult. It takes years and years of experience to nail it consistently.

At the same time, the triple 20 is the highest possible score on the dartboard. If you’re able to pull it off, you can beat pretty much anyone in the world!