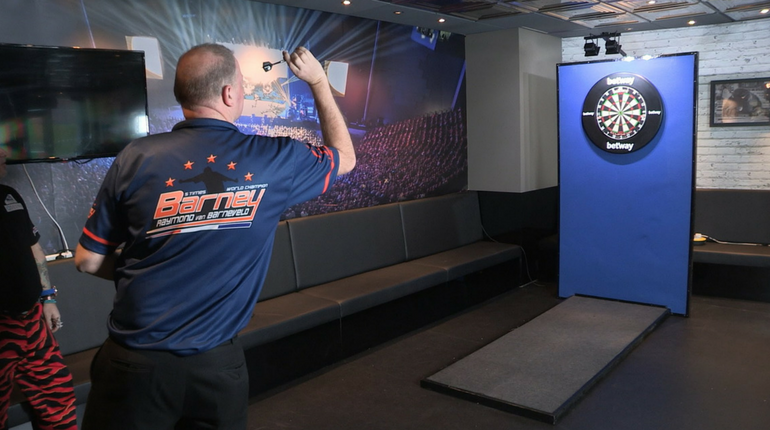 Are you familiar with all of the terms that are used in professional darts? I can pretty much guarantee that you’ll say no.

Even if you say yes, there is a good chance that you’re not entirely familiar with all of the terms or the origins of those terms.

The oche is one of the most commonly used terms in darts. If you want to play darts, you need to learn about this term right away. Otherwise, you’ll get yourself into hot water and you’ll break the rules.

Below, I’ll provide you with a more in-depth explanation of this term and how it came to be known as the oche.

What Is The Oche?

The oche is the throw line or the toe line in darts. In the world of darts, the oche is the line that you’ll stand behind when throwing your dart.

In order to ensure that everything is absolutely perfect, the oche needs to be measured precisely away from the face of the dartboard.

For steel-tipped darts, the oche should be placed 7 feet, 9 and ¼ inches away from the face of the dartboard.

If you throw the dart from a closer distance, you’re going to get penalized or disqualified.

Where Did Oche Come From?

So, you want to know where the term oche came from. Unfortunately, there is no definite answer.

The term has been around for a long period of time and no one is really sure where it came from. However, there are some theories.

Oche was actually introduced to the public by the British Darts Organization in the middle of the 1970s. It is also believed that the term may be derived from Old Flemish. It could actually mean ‘nick’ or ‘notch’ in Old Flemish. Again, nobody is really positive where it came from.

You’re likely pretty familiar with the sport of ice hockey. And, you’ll agree that hockey is far different from darts. Believe it or not, hockey was a commonly used term in darts when it was standardized in the 1920s.

During this time, hockey was used in replace of oche. It was used to describe the line, where the player stood before throwing his or her dart. In the early days, the term hockey was used repeatedly.

It was once used by the News of the World and it was also used by the organizers of early dart competitions.

There is some speculation that the original word was actually oche and it was simply misheard.

Some believe that the word oche might have something to do with the old English word, hocken.

Hocken, which means to spit, is commonly used in the Northern part of England. I am not sure whether I believe it.

Nevertheless, some claim that the hockey line was determined by the specific distance that the player could spit with his back to the board. Who knows? Nobody is really positive where the term came from. In fact, your guess is as good as mine.